Strength, Perseverance, and Hope in Beverly

Last year left the citizens of Beverly and those around the world reeling as we all joined together to stay safe and healthy from a global pandemic. For our 4th Community Art Show the theme is “Strength, Perseverance, and Hope in Beverly”. This exhibit illustrates  the numerous stories of how the community stayed together and hopeful while being socially distanced, how we forged ahead in days of grief, anguish and uncertainty, and how Beverly and its resilient residents made it through the chaos and destruction of 2020.

The Historic Beverly Community Art Show consistently opens to rave reviews and this year will be like no other. This juried art show draws more than 40 local artists who submit over 60 works of art from pastels and drawings to paintings and photography. This is an exhibit not to be missed! On view through December 18, 2021.  All artwork is available to purchase.

Set at Liberty: Stories of the Enslaved in a New England Town 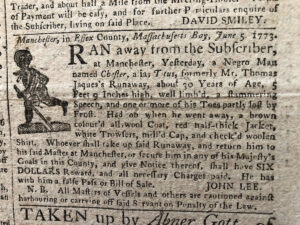 Remarkably, some of the stories of Beverly’s black population have been preserved and can be found at Historic Beverly. These are stories of citizens, black and white, battling against the unjust system of slavery; of enslaved men fighting for freedom for our nation, though not free themselves; of a woman using the law to emancipate her family; and of the racism that affected the lives of Beverly’s black population, long after they were freed from bondage. This online exhibit presents these accounts using the archives of the Historic Beverly collection.

Have you heard the expression, “one person’s trash is another person’s treasure”? Balch Family History Through Time and Trash is a presentation of the treasures found in the trash of the Balch family. Launched to celebrate Massachusetts Archaeology Month, this new online exhibit explores the 1998 excavation performed at the Balch House. Through items found during the dig, the history of the family can be explored to determine who was living on the premises, what they were using, when they were using it, and how they were obtaining it. 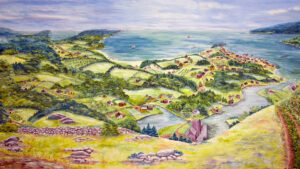 After the tumultuous years of the second half of the 17th century, filled as they were with political upheaval, Indian wars, and culminating in the witchcraft crises of 1692, the new century must have seemed to local residents like entering a calm port.Although religion remained an important aspect of colonial life, the power of the church in civic life was on the wane. Beverly’s economy remained focused on maritime trades and agriculture, but new trades emerged during the period. Clockmakers, cabinet makers, silversmiths and other artisans created objects for an emerging well-to-do class. A spirit of change and possibility emerged in the 18th century, with profound consequences for our local community and America.

Ongoing at the Cabot House

The Hale House: A Visual History 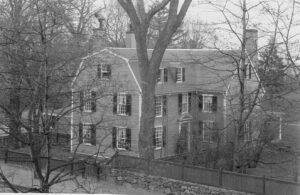 Step back in time with this visual timeline of the history of the Hale House. Images dating back to the early days of photography through the present day tell the story of just a fraction of the house’s 375 years. Images capture the evolution from tenant farm to Gold Coast estate and the story of a family home for generations,

On view at the Hale House through until December 18. Open for members, and open to all on: September 18, noon – 4:00 pm; October 10, noon – 4:00 pm; Saturdays from Thanksgiving until Christmas